For the first time in several years, the weather and the Kansas City Chiefs schedule both cooperated 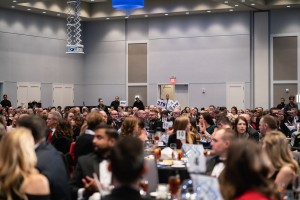 Almost 550 people attended the event, held this year at the beautiful Embassy Suites in Olathe. Attendees enjoyed the VIP Social, silent and live auction, a delicious meal, and an inspiring program.

The Cry Purple Award, the annual award given to a person or organization for outstanding efforts in combating human trafficking, was presented to David and Harold Seba with Seba Brothers Farms. The Seba brothers, after hearing about the problem of human trafficking at 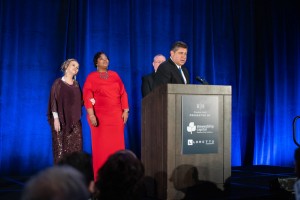 their home church, Heart of Life, looked for a way to get involved. They provided Restoration House with two houses in Cass County to be used as the residential home and the programming center. Restoration House operated out of these houses for four years, during which time many women were given a place to call home. After receiving the Award, a video of the Seba Brothers was shown.

Geoffrey Arbuckle, R|H President, delivered a very compelling speech outlining his vision to establish R|H Farms, a three-year restoration community for adult women survivors located just outside of the Greater Kansas City metropolitan area. Led by human trafficking industry experts, R|H Farms will be the nation’s largest capacity and most comprehensive healing and restoration community. In the next 12 to 18 months, the goal is to expand capacity making room for 40 adult survivors at R|H Farms. In his 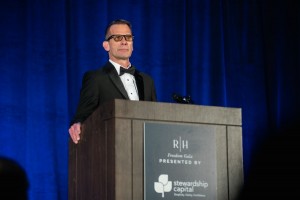 speach, Geoff passionately declared “We can send a message that Kansas City will no longer appear on human trafficking lists for the reason that it does. Instead, it will appear on that list as the NUMBER ONE central healing location for survivors of human trafficking.”

Legacy Auctioneers took advantage of the Chiefs win in the AFC Championship game to auction off Chiefs memorabilia including two autographed Patrick Mahomes jersey’s and an autographed Travis Kelce jersey, raising several thousand dollars. By the end of the evening, more than $203,000 was raised to help fund the fight against human trafficking.

After the gala, one of our attendees wrote to her table host and RH Board Member, Karen Finke. Nancy Kimak had this to say:
“Karen, thank you so very much for the gift of the RH Gala invitation for John and I last night. The event was one of the best benefit events we’ve been to perhaps, ever. Every stroke was well executed, meaningful and impressionable.”

Thank you to all who attended, supported, donated and served! We couldn’t do this without you! 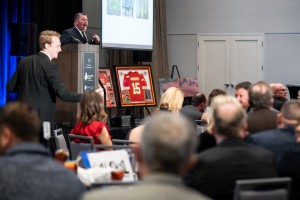