You are here:Home/College Ministry/God’s Faithful Hand in Student Ministry
Previous Next

It’s difficult to adequately share about the work of God in the lives of students over the past ten years at MCC-Blue River and MCC-Longview. While it would be impossible to share every detail and story of what God has been doing in students’ lives, I can share some highlights, as well as some important lessons God has taught me personally over the years. 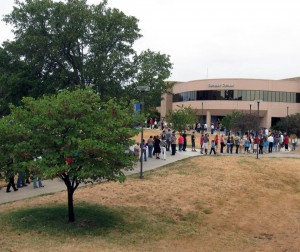 In the early days of ministry at Blue River, I met Andy. We talked about spiritual things on a number of different occasions culminating in a conversation at Starbucks when he asked me to explain the concept of God’s grace. I took that opportunity to share the gospel with him and he responded positively. I recall the text message he sent me thanking me afterward because of the overflowing joy he felt. In the months that followed, Andy started attending church on Sundays, he joined my weekly small group, and he even went on a mission trip to Argentina. But, shortly after, he began to disengage and pull back. He told me that he felt like he took on too much too soon. It wasn’t long before he’d moved on. I lost contact with him and didn’t see him much for the next several years.

Fast forward to a year and a half ago. Andy showed up again on a Sunday morning out of the blue with his girlfriend Megan. Since that morning, he’s once again attending regularly on Sundays and involved in our small groups. I recently met with both of them to ask them where they were spiritually. As best I can tell, they haven’t yet crossed the line of faith as I’d originally concluded so many years ago. I share this story because the Lord has taught me that I have to be patient with His work in the lives of people. What originally felt like a failure on my part, I now see as part of God’s ongoing work in Andy’s life. I’d invite you to continue to pray for his salvation and for his girlfriend Megan’s salvation.

The Lord has given me encouraging and exciting opportunities to connect with Muslim students over the years, especially at Longview Community College. I enjoy spending time with these students because they’re more eager to talk about God than the average student. Several years ago I hosted The Alpha Course on campus at Longview. Alpha is a series of interactive discussions that freely explore the basics of the Christian faith. No pressure. No follow up. No charge. Each week is built around a meal, a brief video teaching on a core belief or practice of the Christian faith, and group discussion.  This was my first time hosting and the class drew a dozen Muslim students who attended consistently over the course of 5 weeks. 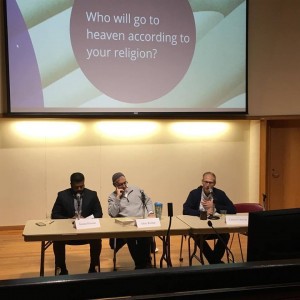 This led to another opportunity to share Christ at The Islamic School of Greater Kansas City. A Muslim student told her former high school teacher about me. Her former teacher, Maisa, later invited me to come speak to her class about the Christian faith. I was given 30 minutes to share the gospel followed by Q & A from the students. It was incredible! Maisa, Jeannine, and another teacher even visited my church, LifeConnection, on an occasion or two. Because of this connection, I was later invited to participate in an open forum discussion hosted by the Muslim Student Association at Johnson County Community College to represent the Christian faith alongside a Rabbi and a Muslim. I got to share the truths of the Christian faith to an auditorium full of students, many of whom were Muslims. Most recently, a former Muslim student and current agnostic named Ahmed has been attending my weekly Bible study on Thursdays at Longview. I shared the gospel with him two weeks ago and he attended our church this past Sunday. Please pray for Ahmed’s salvation!

Another lesson I’ve learned over the years is how essential it is to recruit student leaders, develop them, and empower them to do the work of collegiate ministry. I spent too many years trying to do it all on my own which hindered my ministry. I’ve spent the last several working hard to multiply my life in the lives of college students by developing a core team of students that I invest in and equip to take ownership of their own spiritual growth, to take ownership of ministry to their campus, to share their faith, and to lead Bible studies. I’ve spent the past several years meeting weekly with the core team—students at Blue River who are learning to lead. 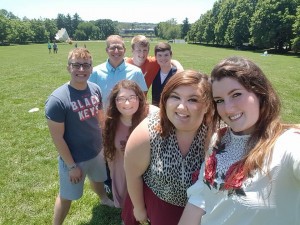 One of those students—Dillon—came to faith in Jesus 3 years ago. He didn’t have a church background, but was still intrigued enough to meet every other week with a few other students to talk about the big questions in life. From that group, I started reading Mark’s gospel with Dillon every week. Then, he started attending our church on Sundays. He started coming to my small group. He walked through our membership class. Then, we explained that if he wanted to be a member at our church, he needed to be a follower of Jesus. So, we asked him where he was with Jesus. He explained he was ready to trust Christ and be baptized. So, we did on Easter Sunday several years ago. Dillon is still young in his faith, but he continues to be engaged at LifeConnection and in the Core Team at Blue River. I’m grateful for the support of the local association and for the way the Lord has used that support to reach and grow college students. Thank you!

This article was originally published in the 2018 Book of Reports. Photo courtesy of MorgueFile.com.