You are here:Home/Gospel Outreach/Finding a Smile Again: Night to Shine Blesses 300 Special Needs Persons in KC
Previous Next

She was 69 years old, but most days she felt like she was 99. Some days it seemed death already had her in its grips, as evidenced by the confines of her wheelchair and the grey pallor her skin held.

Life had lost its luster long ago – if it had ever been there at all. What was the point of continuing to live?  Why had God, if He existed, let her sorry existence endure? Why hadn’t the strokes released her from this planet?

For ten years her caregiver tried unendingly – she had to give her credit for trying, at least – to make her smile. But a smile simply didn’t exist in her heart anymore. She didn’t smile, didn’t speak…just existed.

For some absurd reason, she’d allowed her caretaker to talk her into attending Night to Shine, a prom-like experience for persons with special needs.  Prom.  Hah. As if prom weren’t ridiculous enough of an idea, throw in an old, tired woman in a wheelchair for some kicks.

But here she was, dressed up as if someone might notice, standing at the edge of the red carpet. Warm smiles and friendly paparazzi awaited her. A volunteer buddy greeted her with a big grin on his youthful face. He took over pushing her wheelchair down the red carpet, asking her name and encouraging her to smile. The resolute frown remained on her face.

The first stop was a hair and makeup booth. She resisted – she had purposefully avoided the mirror for many years. But she couldn’t refuse that handsome smile on the young man’s face. They pampered her, fixed her hair, put on makeup. Finally, they turned her toward a mirror and told her to look. She peeked one eye open, then the other, and gasped.

She felt the bud of something she hadn’t felt in a long, long time. Maybe, deep inside her, a smile could still be found. Maybe, just maybe, there was something beautiful within her.

On February 10, 2017, Blue Summit Baptist Church in Kansas City served as one of over 350 churches to host the Night to Shine event sponsored by the Tim Tebow Foundation. The event has become a worldwide movement, set to take place in all 50 states and 10 countries next year.

This unforgettable event gives people with special needs ages 14 and older a prom night extravaganza. For a night they are treated as royalty, doted on by volunteers through tangible displays of the abundant love of God. For many, Night to Shine is the only party or dance they have ever been to.

The VIPs (Very Inspiring Persons) enter the event on a red carpet, greeted by friendly paparazzi. They are paired with a buddy who guides them through their royal treatment, including hair and makeup stations, shoe shining, limousine rides, corsages and boutonnieres, a catered dinner, karaoke, prom favors, photo booths with favorite characters and Super Heroes, and a dance floor. At the end of the night, each VIP is crowned king or queen of the prom. 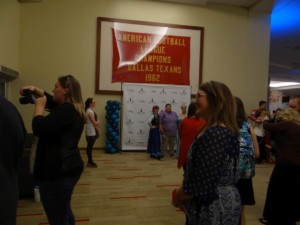 BRKC sent a representative to attend and report on the event. We caught up with Charles Beeghley, the pastor of Blue Summit, and his wife, Tammy for a quick interview in the middle of the event. Charles and Tammy have poured countless hours of sweat, tears, and hard work into making this event happen for the second year in a row.

Tell us about the inspiration and vision for Night to Shine.

Charles: Night to Shine was inspired by Tim Tebow. Tim has a heart for kids. A couple of years ago, he started this event with 40 churches. Last year there were 200 churches.

How long have you been doing this event?

Charles: This is our second year. It’s our passion. We want to let everyone know they are loved by God and that they are made for a purpose.

How did your church come to be involved in the event?

Charles: Two years ago around Christmastime I got an email from the President of NAMB. He said Tim was looking for more churches to add to his event. I said, “Well, we have a heart for special ministries. But they’ll probably say no, because we can’t do it in our church building. It would cost more money to host somewhere else.” Our church isn’t built for the handicapped. We filled out the application anyway and were accepted – 31 days before the event! We had to find a venue, recruit the volunteers, and get the VIPs to come.

We ended up with a total of 300 people at the Brush Creek Community Center. This year we wanted a venue that was easy to find and close to the interstate. That’s why we had it here at the Arrowhead Club.

This is a huge turnout for the second year!

It is. Our original budget was for 125 VIPs. We posted it on some news media sites. I hadn’t even emailed last year’s group homes yet and we blew through the 125. We bumped it up to 175, and that blew out too. So then we  added a wait list and said, “We’ll just have to wait and see.” At that point we had 68 volunteers for 175 VIPs and their caregivers.

That’s when the local K-Love radio station saw what we were doing and said they wanted to partner with us. They sent out a text blast and within a few days we had the 350 volunteers we needed. It continued to grow from there. People heard about it on the radio.

We had a live conference call with Tim and all the other host churches. One of his big things, he told us, is, “Whatever you do, don’t say no.” I thought, “Yeah, but you don’t understand, not saying no is expensive!”  But I told my wife, “We’re just going to have to trust God. We saw him miraculously provide the resources we needed.

How many people ended up attending this year’s event?

How did you pull off an event this big?

Charles: A lot of professionals, like the photographers, volunteered their time. The limos are donated. Inner City Fire is right next to the church and we partner in a lot of things. We partnered with a lot of churches. Noland Road contributed a large number of volunteers and finances. We couldn’t do this with just our church. We’re expecting that next year’s event will grow because more people will hear about it. The only way that will work is if we can get other churches involved in helping make this bigger. 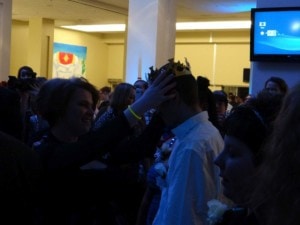 What are your hopes for the event? How do you want people to be impacted by it?

Charles: For one, our hope is that we’ll be able to put more of our churches together in doing things. The focus of our Association is to create an environment where churches work together.

We’re also hoping that there may be some people here who aren’t connected to a special needs ministry in a church, and we have several churches here we could connect them to.

This year we have connection cards. If the buddies want to follow up with their VIP they can get their contact inforamation. I met a girl last year who came back this year. She ran over to give me a big hug. I told her that her buddy from last year had just arrived. She was so excited and was running to go find her buddy. It left a big impression. For most of the special needs population, there’s just not a lot for them to do.

Tammy: My biggest hope is that each person who came here feels loved. I’ve talked to a few people here who have never been to a dance and they’re in their forties and fifties or even sixties. I think this is a special way to show them they are loved. God created them for a reason. I hope the volunteers are just as blessed as the people they helped to serve. My overall hope is any who didn’t know Christ come to know him because of an event like this. They may have never been told God loves them.

I’ve definitely been blessed by this. So many awesome people, and they’re all so happy. That’s awesome.

Do you have any highlights from tonight so far? 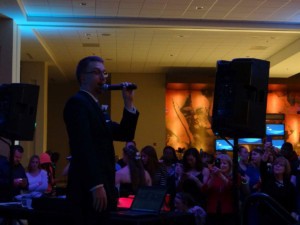 Tammy:  I have so many; it’s just hard to narrow them down! There was one young man who came who acted really scared when he got here. He didn’t know what to expect. He got paired with a buddy who took him around. We asked what he wanted to do. When we mentioned Spiderman was here, he lit up and went straight to the photo booth with Spiderman. The photographer said he had biggest smile of anyone all night.  He came scared and was leaving happy and blessed. That’s my biggest one for tonight right now. I’m just ecstatic for how this turned out.

The limousine ride, the delicious dinner, the hilarious karaoke, the photo with the miniature horse in the photo booth…it was all too much. She placed a hand on the delicate corsage pinned on her lapel, and a tear slipped the corner of her eye.

Her buddy had wheeled her out on the dance floor. She watched as others – who, like her, were forgotten and ignored by most of society – danced and laughed and had the time of their lives.

Her foot began to tap, slowly. Her body began to sway, gently. Her hand went 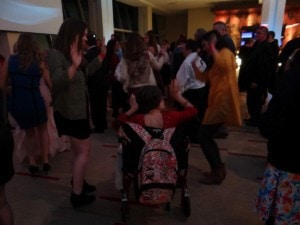 From deep within, a smile found its way to her lips. First just one corner of her mouth, then the other, and then a full, heart to toes kind of smile. That smile blossomed over into a laugh as if she was a carefree little girl again.

Perhaps life was still worth living after all.

If you would like to learn more about how your church can partner with Blue Summit for next year’s event, contact Charles and Tammy Beeghley at [email protected].