She was looking for a place that could host her youngest daughter’s first birthday party. It was going to be a grand party since the little girl was a testament to the power of prayer. There was no medical or physical reason as to why or how she had survived in the womb to be born a healthy baby. There were only the fervent prayers of her parents, grandparents, family and friends. The family wanted to celebrate and give glory to God and invite as many saved and unsaved friends as they could. The original plan was to have this celebration in a local park, but the weather forecast called for rain on that Saturday afternoon.

While all of this was happening, Norfleet Baptist Church was actively praying that our church would no longer be invisible to the thousands of people that live within a stone’s throw of us. We have canvassed the neighborhoods many times. We have hung door hangers, Gospel tracts, and invitations to church on their doors. We have rung doorbells and shared the Gospel. We have prayer walked. We’ve put flyers out in the elementary schools. We’ve adopted local families at Christmas. We’ve hosted Trunk or Treats, Easter Egg Hunts, Movie Nights, and Vacation Bible School, but we felt invisible. Nobody seemed to know that we existed. And then the phone rang. The lady spoke with an accent, and after about a minute into the phone conversation it was obvious that she was a Christian.

We immediately offered her the Fellowship Hall for the entire afternoon for her daughter’s birthday party. At the birthda 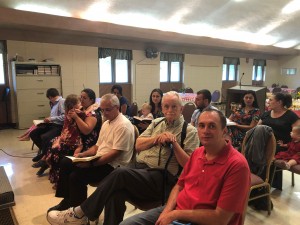 y party, we discovered that they were Russian immigrants who had fled their homeland in the early 1980’s under threats from the KGB. They had immigrated to the Seattle area. The young mother’s father was their pastor. His preaching was what brought about the KGB persecution. They had moved to the Kansas City metro area and her father served as a pastor of one of the Russian congregations in Sedalia.

We challenged them to start a Russian/Slavic work at Norfleet. Some of them have been affiliated with Lenexa Baptist Church’s Russian work, but many of them did not want to drive that far to attend church. They have met in homes but realized how difficult it is to have total strangers in their homes. For one year our challenge laid untouched, until this past July. The young mother contacted Norfleet to see if we were interested in sharing our building with them so that they might start a Slavic church out of Norfleet. On Sunday, August 5th we signed a building sharing covenant with them, and on Thursday, August 8th, they held their first worship service in Norfleet’s Fellowship Hall with eighteen in attendance.

As we visited following their worship, they indicated that there were other Russian speaking immigrants who were waiting 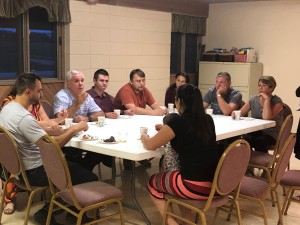 for a church to start in the Kansas City area that may soon attend. Others may move their families to Kansas City because now there is a fellowship in their own language. By God’s grace we and they hope to add Sunday evening worship for them in the future.

All of this because the weatherman forecasted rain for a little girl’s birthday party in the park. To the best of anyone’s recollection it did not rain that day. It is simply the Lord at work joining our readiness to be available to the direction He sets. And what a blessing we have received as we seek to bless Russian/Slavic immigrants to the KC metro area. Nothing like this has ever been attempted by Norfleet, nor by their pastor. But after our experience in the desert of Kenya, we have learned to cinch up our seatbelts and enjoy the ride! To God be the Glory, great things He is STILL DOING!