You are here:Home/People Teams/Refugee Simulation Shows Participants the Impossible Choices and Harsh Realities of Refugee Life
Previous Next

KANSAS CITY, MO — On October 14, 2017, People Teams hosted the second annual Refugee Simulation in Kearney, Missouri. The continuous live role-play event is designed to help participants learn about the realities of the refugee process through an “in-their-shoes” experience. The hope is that participants will become more knowledgeable, empathetic and effective as cross-cultural ministers – a relevant objective, given that Kansas City is home to an estimated 25,000 first generation refugees.

October 14 dawned unseasonably hot with foreboding clouds and the promise of rain and severe thunderstorms.Thirty-seven participants, including a group from St. Louis, were sent in groups of ten through the continuous role play where 40 volunteers served as actors and support cast.

Participants followed portions of three real-life stories of families who have come to Kansas City or have been ministered to by KC believers. They experienced fleeing a country (based on a family escaping Bhutan), abruptly started with little instruction and the sound of gunshots nearby. They journeyed to safety (based on a Syrian family’s journey), facing difficult decisions along the way, such as whether or not to assist an injured woman lying on the side of the road. They then experienced surviving the Somali famine and staying in a Kenyan refugee camp while attempting seek asylum in another country. 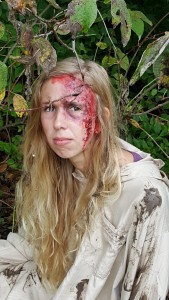 Participants had to choose whether to take injured refugee with them or leave her lying on the side of the road.

d more. Each group had a similar but varying experience based on the choices they made and how “into it” they got.

One group came the debrief time remorseful because they elected to kill someone to escape. Another group felt little remorse for leaving part of their group behind and taking the raft to safety. Other groups reported lying, cheating, and stealing to get ahead. These experiences can make us slow to judge someone who has made mistakes in their journey of survival. Almost all of the groups were surprised that they brushed off the message of Christ because they were so focused on getting out of the camp. Others felt belittled and dehumanized by the aid worker. All participants experienced a few short hours of discomfort and impatience as well as a range of emotions like fear, frustration, and confusion.

One major goal of this year’s simulation was to give participants an easy way to share the Gospel. This backfired when few people cared to take time to listen to the preacher. Many participants talked about Jesus with their captors in the role play. Others did not even when given the opportunity. Others mentioned Jesus but did not explain any further. One group met in a tent, encouraging each other and singing worship songs during stressful scenes.

Hearing believers talk about Jesus even in an artificial environment like a role play is powerful. Equipping believers with tools to explain the full Gospel to lost people will be a priority that People Teams seeks to improve upon, especially for cross-cultural evangelism. Perhaps these experiences can help us go about ministering to our new American neighbors where they are. Perhaps they can help us understand the barriers that stand between them and the Gospel of Jesus so that we can approach them with love and patience. Perhaps they can make us grateful for the blessings of our lives and willing to be stretched out of our comfort zones for sake of the mission of Jesus.

The LORD made this possible through providing all that was needed, from a goat to a group of Somali/Swahili translators. He also held off the rain! Special thanks to Concilium (a missionary security group), FUSION, New Direction Church, Thrivent Financial for providing food, Becca Simmons (a makeup artist at World’s of Fun), Refuge KC, and the many volunteers who made this possible.

Keep on the lookout for next year’s advertisements in late spring for  the 2018 Fall Refugee Experience.