On January 23, 2016, the Restoration House of Greater Kansas City, a residential recovery program for survivors of human trafficking, held its second annual Hope Now Freedom Gala and Honor Dinner. Over 350 people braved the bitterly cold evening to attend the event at the Arrowhead Stadium North Club. The event began with a silent auction, where guests perused an array of auction items ranging from signed sports paraphernalia and artwork to gift certificates and musical instruments. While mingling and bidding, guests sipped decadent hot chocolate and listened to the delightful sounds of the young but astoundingly talented 5 Star Jazz Band. Ms. Ladner spoke with grace, emotion, and compelling passion. She moved guests to tears with real stories of victims her legal team has rescued. She opened their eyes to the shockingly simple ways traffickers prey on victims and the devastating depth of victims’ irrational attachment to their captors. She angered them with the injustices of loopholes allowed by our legal system. She inspired them with the hope that progress is happening, as recent changes in Kansas legislation prove.

Gib Thurman of Thurman Auctioneering conducted the live auction. He was charming, witty, and guilt-trippingly effective as he prodded to raise bids. For the last live auction item, Mr. Thurman auctioned off a custom-made diamond necklace designed by Especially Jewelry. The winner of the necklace later presented it to Christine McDonald, Restoration House’s Program Director, in a beautiful display of God-inspired generosity.

After the live auction concluded, September Trible, Executive Director of Restoration House, and Christine McDonald took the stage. Ms. Trible gave a few remarks of gratitude, exuding her passion for her work before turning the podium over to Ms. McDonald, who herself is a survivor of sex trafficking.

Ms. McDonald left no eye dry as she dedicated five one-hundred dollar bills to five of her friends who 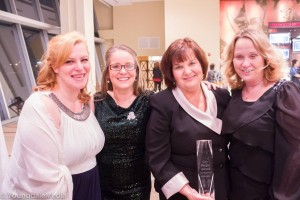 died at the hands of pimps, johns, or drugs. Through their stories, she reminded listeners that the harsh street life is reality for far too many people. She compelled them to remember that Restoration House isn’t about a cause; it’s about real people, with real lives and hopes and dreams. Finally, she dedicated one last hundred dollar bill to hope – hope that these victims can experience healing and restoration. Between auction profits and donations, the Gala grossed an astounding $65,000 for the work of the Restoration House. But beyond providing much-needed funds for Restoration House to continue freeing victims and bringing hope to survivors, something more was accomplished. Every guest in the room was made aware and informed about the realities of human trafficking. With that knowledge comes the challenge to stand up and boldly say, “Not in our city!”

For more information about Restoration House of Greater Kansas City and BRKC’s involvement, visit this page.

View pictures from the Gala here.

Download a PDF press release version of this article.