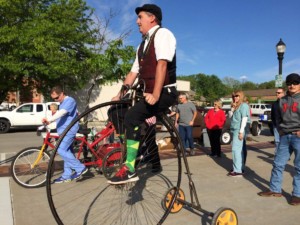 Tuesday, May 2. Another cloudy day. Will it rain or not rain? After days of Noah-like rain, the sun finally broke through the clouds around 4pm.

The afternoon sun shone brightly, accompanied by a gentle breeze that made for a perfect afternoon for a race. Eight brave teams entered the race, contributing a total of $4,250 in entry fees and additional raised funds for the survivors of human trafficking Restoration House serves. These teams came with total abandon, ready to do whatever it took to get those tricycles down the sidewalk and back four times before their competition. 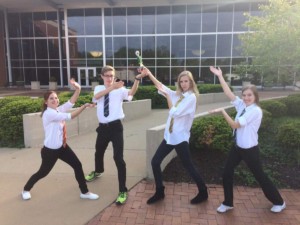 The event kicked off in front of Lee’s Summit City Hall with a cookout of hot dogs, hamburgers, chips, cookies, and drinks donated by Price Chopper. The iconic Dick Wilson of 94.9 donated his time to DJ’the event, playing tunes from decades past and hosting the tricycle fun with witty flair.

After dinner, race time commenced. The teams came ready to win one (or more) trophies in the three categories: Best Decorated Tricycle, Winner of the Race, and Most Money Raised.

The teams raced in multiple tournament rounds, with each of their 4 riders riding 50 feet down the sidewalk and back before trading riders. The adult-sized tricycles proved difficult to turn around for the journey back up the sidewalk. The poor UMKC students barely made it down the sidewalk as their 20+ year old tricycle fell apart one piece at a time, leaving nuts, bolts, and parts behind. 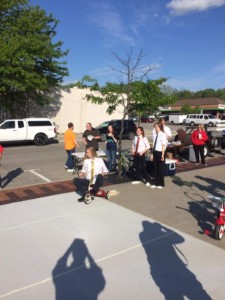 Teams used all forms of creativity – from pushing the tricycle from behind to pushing the ground with their feet and everything in between – to go back and forth.  Rules went out the window in exchange for hilarity and laughter.

In the early 2000s there was a TV show whose byline was “Where everything’s made up and the points don’t matter.” The same could be said of this race. It was the perfect way to spend an hour on a sunny spring Tuesday afternoon: eating and laughing with a bit of competition mixed in, all the while raising money to help transform real lives for those who don’t have the chance to smile or to laugh without hope first breaking in.

As the sun broke through the clouds to make way for the race that Tuesday afternoon, may Restoration House continue to be a ray of hope breaking into the darkness in the lives of survivors of human trafficking.

For more information or to donate to Restoration House of Greater Kansas City, visit here. 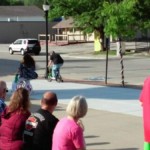 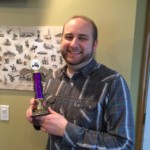 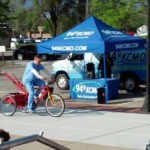 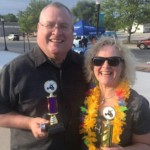