A Mother’s Prayers Lead to Church Plant in Mexico

You are here:Home/Church Planting, Gospel Outreach/A Mother’s Prayers Lead to Church Plant in Mexico
Previous Next

A Mother’s Prayers Lead to Church Plant in Mexico

By Chris Houghtaling. Published in the August 2017 Missions & Ministry Newsletter.

We showed up and God showed off during our From Missouri to Mexico trip June 26th through July 3rd. 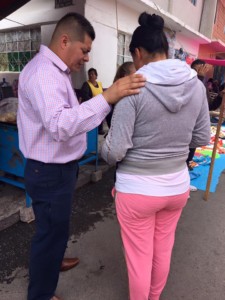 Alberto prays with a woman in the market

Once upon a time, in the not-so-distant past, a mother came to Kansas City, Missouri, to visit her son, Alberto. While in Kansas City she heard of the most wonderful gift God has given to men. She became a follower of Jesus!

Upon returning to her home in Mexico, an area of 173,000 people, she found there was no Biblical Evangelical church. Her heart yearned for a church where she could study the Bible with other believers. She urged her son and his Pastor to help her start a church.

God did what God does. He prepared, He orchestrated, He put together a team of believers and wow did he amaze and astound us! Within a week, we saw countless, literally countless, people become followers of Christ through praying for and talking with them the first day at a marketplace. Crowds were drawn to us for hours in addition to the many home visits to family and friends made throughout the rest of the week along with conversations on the streets. 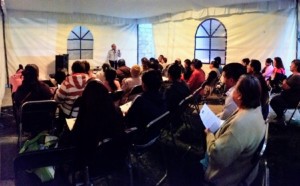 We now understand what it means to say people are “open” and “hungry” for the Gospel. Several times throughout the week people asked, “What will happen after you are gone? Who will lead us?” By Sunday morning, God made evident His answer. He provided a Pastor to lead them along with his wife and three teenage children. Continued

One of the teenage sons is able to continue the leading of worship music using his guitar. Not one, but two churches were formed about 25 miles apart.

The week after our team left, the dedication of the people  continued with one ch 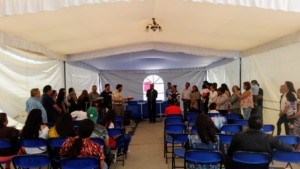 urch having about 45 different people attending between Thursday evening and Sunday morning and the other church having about 25 people during its Friday evening meeting. Ephesians 3:20-21 says: “Now to Him who is able to do above and beyond all that we ask or think according to the power that works in us—to Him be glory in the church and in Christ Jesus to all generations, forever and ever.” 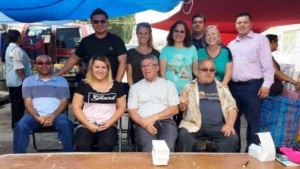 The Missionary Team consisted of Pastor Luis Mendoza along with Lisandro Gonzalez, Alberto & Arianna Cerecedo and their daughter Camila of Iglesia Cristiana Palabra Viva in Northeast Kansas City, Lauren Chapman of Emmaus Church, Willie and Teresa Colon of Pleasant Valley Baptist and Chris Houghtaling of First Baptist Blue Springs. They were joined by Pastor Julio Cesar Machado and Javier and Gabriel Herrera Cervantes along with their three teenage children who are from Santiago de Cuba. 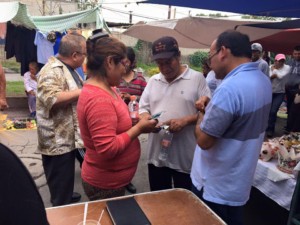 Pastor Luis and Willie at Marketplace 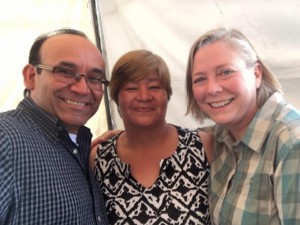 Luis and Chris with Senora Patti