You are here:Home/Restoration House/Good Wins & Hope Restores at the 2018 Hope Now Freedom Gala
Previous Next

KANSAS CITY, MO– The 4th Annual Hope Now Freedom Gala, benefiting the Restoration House  of Greater Kansas City, was held for the second year in a row at the Intercontinental on the Plaza on January 20. Over 615 gathered for the event, which featured a VIP social on the rooftop with author Christine McDonald, the 5 Star Jazz Band, a silent and live auction, dinner, keynote speaker and Cry Purple Award recipient Russ Tuttle. 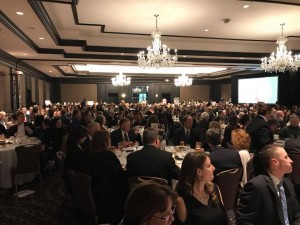 The program was as power-packed as years prior. Various speakers from the board, sponsors, and staff of Restoration House celebrated the recent triumphs and travails of Restoration House and its partners in the fight against sex trafficking. In between speakers, a video chronicled the powerful testimony of a trafficking survivor who came to Restoration House in 2017. She described her lingering PTSD, fears, and triggers as “just what the enemy wants to do to keep me from doing what the Lord wants to do.” The remedy for those things? Love, she said, specifically the love of “people who love us unconditionally even though they don’t know us. That’s what we need – love.”

[bctt tweet=”What trafficking survivors need is people who love us unconditionally even though they don’t know us. – Restoration House resident” username=”BRKC_Baptist”] 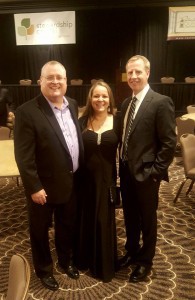 Her weighty yet hope-filled testimony segued into a poignant moment of solidarity as Executive Director September Trible invited the survivors in the room to come forward. One male and several female survivors, including the woman in the video, came to the front of the room while over 600 people rose to their feet in tribute to their journey, their strength, and their restoration. Trible credited their journey with a thought-provoking reflection that “strength is not found in those who stand up and look strong while doing something but those who fight and win battles that others know nothing about.”

[bctt tweet=”Strength is not found in those who stand up and look strong while doing something but those who fight and win battles that others know nothing about. – September Trible” username=”BRKC_Baptist”] 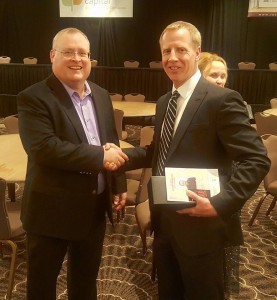 Russ Tuttle, Founder of the Stop Trafficking Project, stole the show with his climactic speech. Clothed in the humble spirit of Jesus, he graciously accepted his award, saying, “It feels like an exaggerated joke that I would be associated with this award.” He dedicated the award to his wife, his parents, and his staff, repeating the phrase, “this is for you.”

He then captured the audience with a taste of his trafficking prevention work with youth, using startling stories and shocking statistics to demonstrate the hidden dangers of social media and the reality of the sex-inundated culture our youth are facing. The task is daunting, he admitted, overwhelming, even. Yet, he said, “God is so big. In humility we are better together.”

He concluded with a dazzling buildup illustrated by mind-boggling visual slides of a beam of light in unexplored galaxies to drive home his point: God’s bigness and majesty are unfathomable even in the face of such overwhelming evil. “The bad news,” he concluded, “is there are too many lives to restore. The good news is, hope restores.”

[bctt tweet=”The bad news is there are too many lives to restore. The good news is, hope restores. -Russ Tuttle” username=”BRKC_Baptist”]

The 2018 Gala grossed $180,000. The impact goes far beyond the dollar  sign, however. For if one man was convicted to lay down his sex addiction and start stopping the problem instead of perpetuating it…if one parent realized the dangers of their child’s unchecked social media access…if one survivor felt loved and supported by 600 unnamed faces…if one individual got a glimpse of hope for the first time…then there can be no doubt, good wins and hope restores.